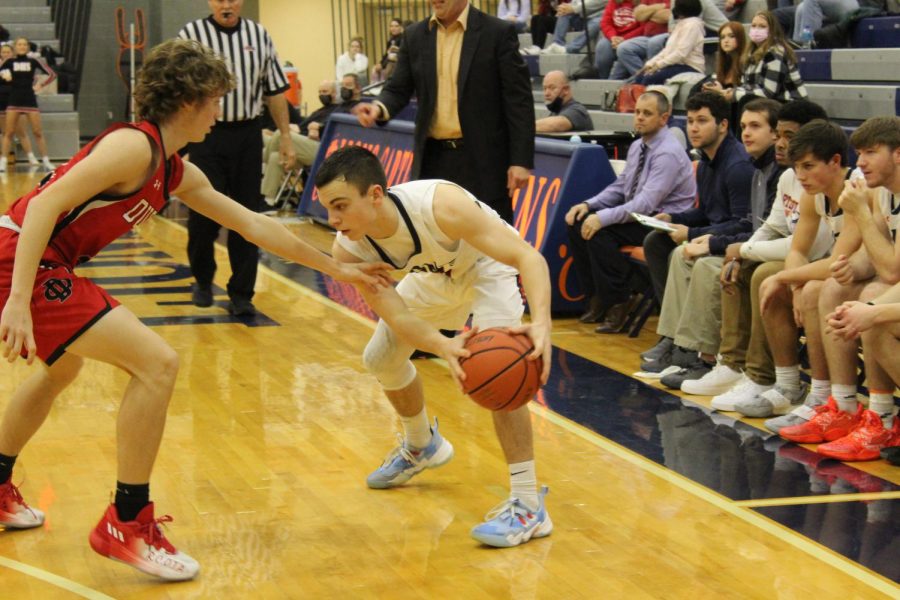 In their previous match-up, the Lions facedDuQuoin at their place and lost on a last second buzzer beater by DuQuoin’s Maurice Washington.

When asked what was going on in his head before the game, Carterville’s Kade Lustenberger  shared that he wants to “do whatever it takes tonight to take home the W especially since we lost to them earlier in the year. We have been really good in practice and I’m hoping we come out on top.¨

The first quarter started out by DuQuoin’s Jaden Smith and Carterville’s Aiden Hinton splitting attempts at the rim. Smith ended up having the first 5 points for the Indians.

The second quarter started off with an and-one by Carterville’s Caden Hawkins, who ended up with 19 for the night.

Lions then went on a 11-0 run in the second quarter, causing DuQuoin to take a timeout with 4:35 on the clock. After the timeout, DuQuoin´ś Traijon Smith hit a three-pointer to bring the Indians back into the game.

To end the second quarter, Hawkins netted a buzzer-beater 3 to bring the halftime score to 43-31, Carterville.

In the third quarter, the Lions held the Indians to only 12 points, while scoring 19 of their own. The main scorers were Hawkins with six and Lustenberger with five. The third quarter score was 62-43.

The fourth quarter for the Lions did not feature as potent of an offense, however, by only scoring 6 points due to the DuQuoin’s last-chance defense. Regardless, the Indians could not do enough to get back into the game and the final score was 68-58 Carterville.

The Lions ended up 47% from the field compared to the Indians 51%. The main difference in the game was the Indian’s turnovers. They ended the game with 20 turnovers to the Lions 14. The Lions were 10-for-19 from the free throw line, while the Indians were 3-for-3 on free throws. The leading scorer for the night was  Hawkins with 19 and DuQuoin’s Hutchens with 11. This win makes Carterville 3-3 in the conference.

The Carterville Lions play next on Tuesday, February 15 against Cairo at home. JV starts at 6:15 with varsity to follow.

If you wish to keep up with the rest of Carterville sports, be sure to check us out on Instagram and Twitter, @CartervilleAth.