The Most Magical Week 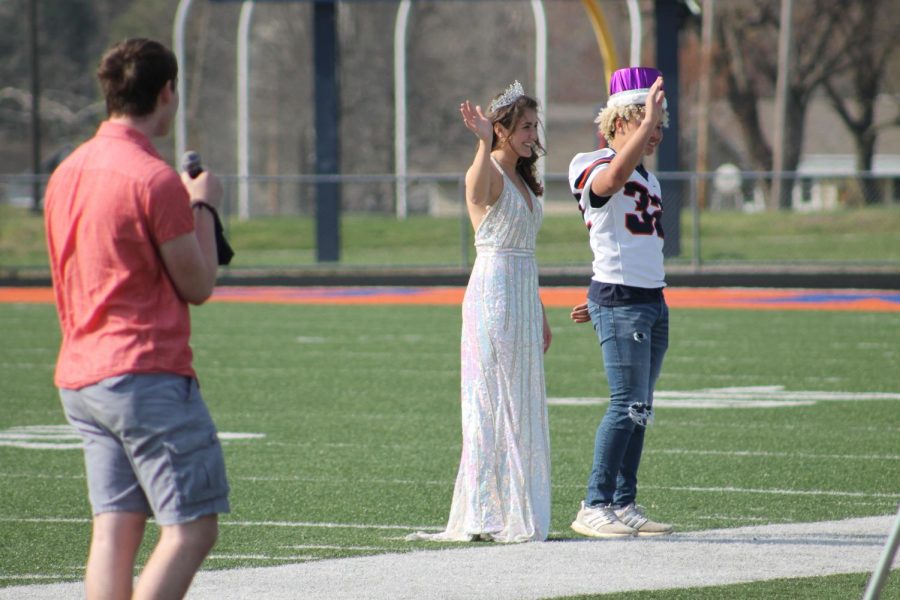 Noah Adams (12) sings "There She Is" by Frank Turner as Annabelle Barnstable and Jaxon Allen wave to the people in the stands.

Homecoming for the 2020-2021 school year was by far much different than any other year. Not only did it take place in the spring, but it was also split up among five different events. Senior parents put together a parade, while the school presented a Disney themed week with a hallway decorating competition, spirit days, football game, and coronation to represent this year’s homecoming.

In past years, the homecoming parade was hosted by the high school with a competition between grades for building the best float. This year the competition came with decorating a hallway to match the theme each grade was given. Students, such as sophomore Callie Russell, came into school on a Friday morning eager to get to work. Russell shared her opinion on the hallway decorating by saying, “I really enjoyed getting to decorate the hallway this year, even though the homecoming celebrations were different than last year. After having many cancellations this year, it was nice to have some normalcy back in our lives.”

The juniors took first place with their Monster University hallway, followed by the sophomores with Star Wars, the freshmen with The Jungle Book, and, in last, the seniors with Marvel. The students who participated in the competition had a challenge of staying on time and within budget to complete their hallways. Erran Mathews (9) shared her opinion on the hallway results by saying, “Overall, I thought that all of the hallways looked good. However, if I was the one to have chosen the winner, I would have picked the sophomores, if not, the freshmen.”

Along with the hallway competition, spirit week had a good number of students that participated by dressing up according to the theme of the day. Day one consisted of dressing in Hawaiian gear, followed by twinning with someone else for day two, dressing as an alien or a cowboy for day three, and in your class assigned color for day four. Best dressed for each day won a prize, as well as a winner for daily Disney related trivia questions.

Many students, especially seniors, took dress up days to the next level. These students went all out from head to toe in their attire. Senior Daniel Shao was one of these students. He painted himself pink for class color day, landing him an award for best dressed that day. Shao shared his thoughts about dressing up by saying, “Why not go all out in your last year? Plus, who doesn’t want to be all pink for a day.”

Continuing the week, the varsity football team took on the Nashville Hornets on Saturday the 27th for the homecoming game. The Hornets beat the Lions 41-27 after a hard fought battle the first half. Even though the lions lost the game, the players put forth their best effort in an attempt to win the game. For the seniors, this was their last home game. Trevor Stewart expressed his feelings about this by saying, “I can never ask to play for a better team than I have this year. These guys are the best in the world and I am blessed that I get to play alongside them. I am glad I got to play my last home game on our turf with those young men.”

Finishing off the homecoming week was coronation. Instead of attendants from all grades, this year’s coronation only consisted of senior attendants. In total, there were 10 queen candidates and 15 king candidates. Coronation took place on the football field immediately following the game, where Jaxon Allen and Annabelle Barnstable were crowned king and queen. Barnstable shared her thoughts on being crowned as queen by saying, “This year’s homecoming will always be a special memory. Even though it wasn’t the way we all planned on celebrating, I am extremely grateful!”

While homecoming looked quite different from previous years, the planned events still attempted to create a feeling of normalcy. CHS students still took part in the events they could to try and make the school year a bit more enjoyable over the course of the Disney themed week.