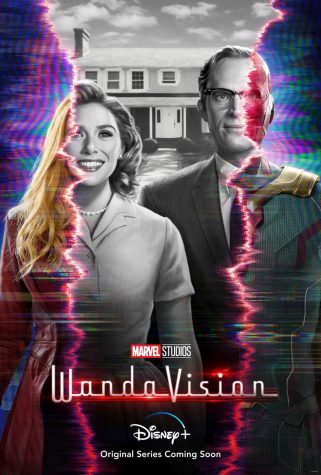 WandaVison is the newest Marvel series to be released on Disney+, having been released on Friday, January 15th. This series is the first installment of MCU content released in 18 months. Similar to the Star Wars show The Mandalorian, which is also on Disney+, they have only released two episodes of the series and are set to release one episode a week, on Fridays, until the middle of March. The first two episodes they have released serve as an introduction to the characters, the time period, and what has happened to bring them there.

This series is following the events of Avengers Infinity War where Vision (played by Paul Bettany) is killed for the mind stone which is inside his head. Wanda Maximoff, Scarlet Witch (played by Elizabeth Olsen), doesn’t want to live her life without him. So, she creates an alternate universe that begins set in the 1950’s and progresses through the decades where Vision is still alive. This show puts a modern spin on the classic sitcom style, with beloved characters and many cliffhangers.

This show has very mixed reviews. Some say it is tough to understand what is happening and why it is happening, but others say they love how the cliffhangers leave them on the edge of their seats and unable to wait for the next episodes to be released. I fall in with the people who love the cliffhangers and can’t wait for the next episode. 87% of Google users that had watched the show liked it and it scored a 96% on Rotten Tomatoes.

According to ScreenRant, “Some naysayers point out that WandaVision may have veered too far away from the typical comic book project fare…(Paul) Bettany has only one short piece of advice for those who are finding WandaVision thus far lacking: “PATIENCE.”“. This show makes connections to classic sitcoms such as I Love Lucy and Bewitched but it subtly hints at darker upcoming themes.

They have now released a few episodes and things are taking unexpected turns. I asked some students for their opinions. Sophomore Charlie Howerton says,” Since only two episodes have been released I don’t think that I could have a fully formed opinion yet. However, I do really like the two episodes that have been released but they are kind of confusing because you don’t really know the plotline yet,” I agree with this because there is no way to tell what turns this show is going to take. Sophomore Maria Williamson said, “I give Wandavision a 5/5! It was amazing! Some of my favorite parts were the ads that they added in the first few episodes. They all connected back to past Marvel movies and I thought that was super cool. Episode 4 is by far my favorite episode and I can’t wait for more episodes to be released!” I also agree with this because I like all of the connections they make to the other movies Marvel has released.