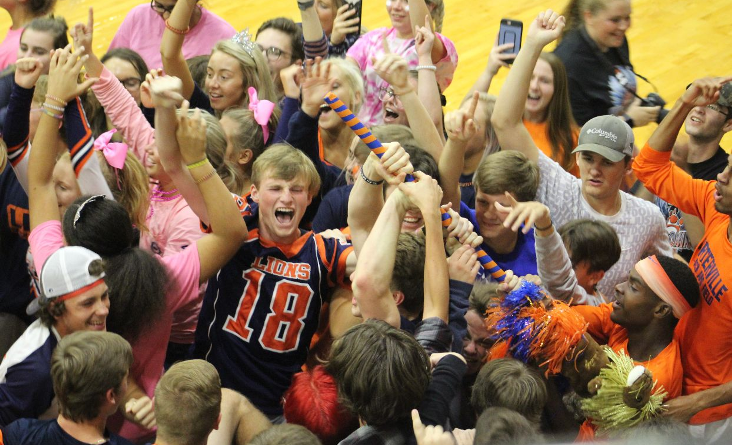 Seniors celebrate their spirit stick victory together one last time at their final homecoming pep rally.

In light of the events swarming around the globe, a result of a pandemic causing mass panic and precautionary measures even in the small town of Carterville, IL, many seniors dread what their final weeks as students of Carterville High School will bring. The unpredictability of what is to come for the final weeks, days, and hours for the senior class has sparked fear over what was to be many “lasts” for their high school experience, something many are finding very difficult to shake. What was supposed to be many seniors’ final bows, games, and dances now seems like an utterly grim final semester in the unforeseeable future of such a forceful event.

While many underclassmen at CHS were celebrating this shutdown as a break from school, seniors mourn the loss of what was going to be the little time they had left with people they grew up with. Senior Olivia Cripps responds to such an unpredictable event by saying, “It’s disheartening to know that some of our most meaningful high school memories could possibly be taken away from us. The last two months of senior year are supposed to be fun, exciting and memorable. They’re supposed to be our last memories together before we tackle the real world.”

Olivia was excited to jump into not only her final months as a student at CHS, but also as one of the school’s many devoted athletes. She has played soccer for the past thirteen years with this spring to be her final run in her senior season.

Other sports, such as baseball, softball, and track are facing a similar fate as well, fearing to see a quick end to their seasons after the progression of events over the past couple of days. Senior track athlete Madison Fleege hopes she will have “a chance at a final year on the Carterville track team,” a similar feeling among many senior athletes.

Along with the disappointment faced by senior athletes after spending countless hours training for their senior seasons, fine arts students face a similar end to their final shows and performances on the CHS stage. Devoted seniors of the performing arts programs at CHS such as senior Charlie Hagan fear they may never get the chance for a final time in the spotlight. “Seniors have waited for so long to have a chance for a final bow on the CHS stage, and now we may never have that chance,” says Hagan when reflecting on recent events around the globe. Hagan was ecstatic to receive the lead role in the spring Musical “The Seussical” and now fears that this pandemic might “close the show before it even opens.”

Additionally, senior Tobias Lang has similar fears over his final show at CHS: “When I learned that Carterville would be out for about 2 weeks due to the pandemic, I didn’t think much about it. All I thought was ‘oh we’ll go back in 2 weeks and everything would be fine,’ only learning recently that we might not get to finish our high school year. Knowing that this is my final show in high school scares me still but learning about how I might not be able to actually perform in it due to the shutdown hurts,” says Lang after hearing the news about the shutdown.

Despite such a grim period for their final weeks at CHS, many seniors are trying to stay positive during such disheartening times. “While we might end up missing out on some of our final moments at CHS, I think at this time it’s most important that we stand together as a class, a school, and a community. Whether we end up having a chance at our senior prom, a final school day, or even walking across the stage at graduation, it’s important that we don’t forget all our hard work and commitment up to this point in our lives. We will have an opportunity to make a lot more memories, but we really need to do what’s in the best interest of our community,” says senior Maggie Chen.

Seniors will be anxiously awaiting more news of the fate of their final weeks at CHS, while remaining hopeful to hear some good news.