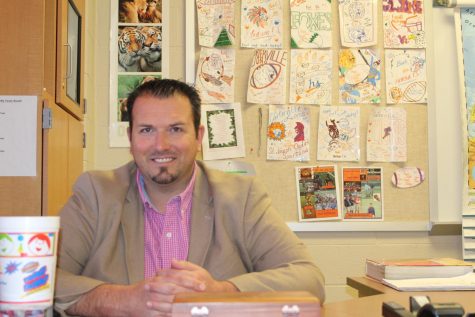 From seventh grade Language Arts, Freshman English, World Studies, Psychology, and AP English, Jake Wakey has taught a variety of classes. He became a teacher by following in his parent’s footsteps. Both of his parents were teachers and therefore, he was exposed to the career early in his lifetime. “It just seemed like a natural fit,” Wakey explained. Due to his early experiences with the career, he already knew what was necessary to achieve his goals.

He was hired right out of college, and immediately went into the workforce and classrooms. Since then, he has taught for 16 years, all of which have been at Carterville. “[My favorite thing about teaching is] getting to interact with the kids and be around adults who care about the lives of kids,” Wakey said.

Throughout all of his years teaching, he has experienced many different things. In his time spent teaching 7th grade Language Arts, he had an encounter with a sticky situation. A student had stuck gum in their hair and he had to assist them in getting it removed. “I did not think that getting gum out of someone’s hair would be a responsibility faced going into teaching” Wakey commented. Even through the new experiences with his he still enjoys his job.

When he is not teaching, you can find Mr. Wakey in camo crocs, hunting, fishing, or coaching track or football. As well as following in his parent’s footsteps by becoming a teacher, he became a football coach like his father had been. He said he had “always wanted to coach” because his dad had.

As a teacher and a coach, he encounters a lot of different students. A few of them were asked what their opinions were towards Mr. Wakey as a coach and as a teacher. Sophomore Katie Kuntze mentioned that “he’s a really great teacher. He’s very straightforward and helpful.”

Sophomore Jaxon Allen, another student of Mr. Wakey’s, explained that, “He is one of the most fun guys to be around. He is always joking around and having a good time. He is very down to earth and honest and respectful. He is a good adult to look up to because he keeps it real with just about anyone and he is easy to relate to and talk to. He is very educated in school and sports. He is a very good coach and one of the best teachers/coaches around.

To get another opinion we asked fellow coworker and former, biology teacher, Brian Davis about Mr. Davis replied with saying, “[he is]extremely organized, [he pays] strong attention to details. [He is] a good motivator and a good adviser.” Along with the positive comments from his students he has received the same from his coworker.

He is very well liked by many of his students and they enjoy his teaching. He has created an atmosphere in his classroom where students can be themselves and learn, as shown by the comments above.